Queen, Oberon's distaff; no relative of Tamburlane, although sore angry at losing Tamlin to fair Janet. Rather poorly served by imaginations (stuck on self-expression, or do I mean self-exposure? no, nothing with so much cellophane and sacharine could be described as exposure) - a 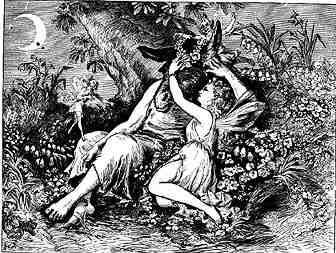 woodcut with Bottom almost the best one can find. And unfortunately, the background to this little groping is also less than uninspiring: "Titania represents Classical mythology in A Midsummer Night's Dream. Like Oberon she is a nature deity. She tells Bottom this in Act III scene 1, when she informs him that "I am a sprit of no common rate. / The summer still doth tend upon my state," Her power over nature is also reflected in the disruptions in weather patterns in Act II scene 1, caused by her argument with Oberon.
The derivation of her name is uncertain. Ovid used it in Metamorphoses (iii, 173) as a epithet of Diana and later of Latona and Circe. However, this did not appear in the translation available to Shakespeare. Either he read it in the original, or his use of the name is a coincidence.* Another possible derivation is from the Titans of Greek mythology."

Inconclusive I fear. Try this instead.

*Stokes, Francis Griffin. A Dictionary of the Characters and Proper Names in the Works of Shakespeare: With Notes on the Sources and Dates of the Plays and Poems.